1 John 2:15-17
"Do not love the world nor the things in the world.
If anyone loves the world, the love of the Father is not in him.
For all that is in the world--


the lust of the flesh and

the lust of the eyes

and the boastful pride of life


--is not from the Father
but is from the world.
And the world is passing away
and also its lusts;
but the one who does the will of God
lives forever."

Temptation always looks new and exciting, promising real satisfaction.  In reality, it is only the wrinkly old whore (Rev. 19:1-2) of sin dressed in the latest fashions.  There's nothing new under the sun.

Genesis 3:6
"So when the woman saw that the tree was

and that it was


a delight to the eyes,

and that the tree was


to be desired to make one wise,

she took of its fruit and ate,
and she also gave some to her husband who was with her,
and he ate."

Satan wants you to think he's fashion forward -- and maybe he is.  But we should know better than to think that the clothes make the (wo)man.  They just hide her age-old saggy sinful self.  May the Lord give us eyes to see through the deceitfulness of Satan's fashion designs.
Posted by Chris McGarvey at 10:40 AM No comments:

"Something Greater Than Healing"

I mentioned last Sunday, in commenting on Psalm 73, that we need to beware of the "must be nice" sentiment.  If anyone has reason for this attitude, it's Joni Eareckson Tada: forty-three years with quadriplegia, the last ten years with chronic pain, and now breast cancer.  Here is the interview I referenced.  She is such a beautiful reflection of the omnipotent grace of God!
Posted by Chris McGarvey at 12:27 PM No comments:

Some of you read October's book of the month: The Reformation: How a Monk and a Mallet Changed the World by Stephen Nichols.  Since I had already read it, I started reading another introduction to the Reformation by Michael Reeves entitled, The Unquenchable Flame: Discovering the Heart of the Reformation (sure to be the B.O.M. for Oct., 2011!).  It's really good.  I love this quote in the section on the English Puritans:


“When just about everybody went to church, it was entirely undemanding to be nominally Protestant.  And, as much as anything else, it was this that the Puritans fought as they urged people to a personal reformation.

However, there was a considerable danger for such a fight….  That is, the desire to have people respond to the gospel could lead to a focus on the response, not the gospel.  …

Thus the experience of all too many church-goers was that they heard many a sermon on the Ten Commandments, but yet remained fuzzy on how or if God would ever forgive them.  …

The result, said Thomas Goodwin (1600-1680), was that in their concern for their spiritual state, ‘the minds of many are so wholly taken up with their own hearts, that… Christ “is scarce in all their thoughts”.’  Unable to look out and trust in Christ’s free grace, they were forced to a morbid introspection, attempting to see if their own hearts felt good enough, or if there was any faith there that they could trust in (and so trusting, not Christ, but their own faith for their salvation).

It was here that some of the Puritan ministries that are still most refreshing came in with the cure.  Richard Sibbes is a glowing example.  Sibbes (1577-1635) was trained in Cambridge, became a preacher there at Holy Trinity Church … Known by contemporaries as the ‘honey-mouthed’, the ‘heavenly Dr. Sibbes’, the ‘sweet dropper’, he was the most effective evangelistic preacher of his day, so appealing that hardened sinners were said deliberately to avoid hearing him for fear he would convert them.

Speaking into the culture of introspection and moral self-reliance, Sibbes preached a series of sermons on Matthew 12:20 (itself a citation of Isaiah 42:3),  ‘A bruised reed shall he not break, and smoking flax shall he not quench, till he send forth judgment unto victory’ (KJV).  Aimed at ‘the binding up of a broken heart’, the sermons were published as The Bruised Reed and the Smoking Flax….

The verse Sibbes expounded refers, of course, to Jesus, and it is a striking feature of Sibbes’s preaching how strongly Christ-focused he is.  And that is no accident:  Sibbes sought to draw his audience’s eyes from their own hearts to the Saviour, for ‘there are heights, and depths, and breadths of mercy in him above all the depths of our sin and misery’.  How so?  Because, since ‘God’s love resteth on Christ, as well pleased in him, we may gather that he is as well pleased with us, if we be in Christ!’  Thus Christian confidence in our spiritual state rests not on our strength of faith or performance, but upon ‘the joint agreement of all three persons of the Trinity’, that the Father loves the Son, and it is in the Son’s merits and not our own, that Christians are loved.  Because God is a loving community, Christians can be confident.

Then, instead of simply laying moral burdens on young and struggling Christians, Sibbes showed them Christ’s attractiveness so that they might love him from the heart.  From then, the Christian’s first task is ‘to warm ourselves at this fire of his love and mercy in giving himself for us’.  Only when Christians do that do they truly stop sinning from the heart (whereas when they merely alter their behavior it does nothing for the sin of the heart).  In other words, Sibbes believed that the solution to sin is not the attempt to live without sin, but the gospel of God’s free grace.

The Bruised Reed is a clarion call for ministers to minister more like Christ, not crushing the weak with burdens, but blowing the oxygen of the gospel onto the smouldering wick of sputtering Christian lives.” (pp. 162-165, emphasis mine)

Spirit of God, blow the oxygen of the gospel on us!  Draw our eyes off of our sputtering lives and fixing them on our Savior, so we will know his love that surpasses knowledge (Eph . 3:14-19).  Amen.
Posted by Chris McGarvey at 12:00 PM 2 comments:

I found a big "Amen" to Proverbs 18:22 rising up in my heart today.  I shouted it out in the house today, but this is my equivalent of getting up on the roof and doing the same.
Posted by Chris McGarvey at 3:26 PM 1 comment:

Rachel Metzger mentioned two organizations she is connected with when she and Todd shared on Sunday morning.  I know Todd & Rachel would be more than happy to talk to any of you who are looking for more information.  Here are the links:

Mid Atlantic Orphan Care Coalition
Speak For Those Who Cannot

Here are a few more links you might want to check out:

Orphan Sunday
Abba Fund (I know the director of ministry development, Jason Kovacs.  Just before we left Grace Church of Dupage to come to Bethel, we were working on the establishment of an "adoption ministry" that would provide resources and assistance to families at the church pursuing adoption.  We connected with Abba Fund in this process and were very impressed with them.)

If you have additional resources worth sharing, feel free to post them in the comments.
Posted by Chris McGarvey at 3:20 PM 2 comments:

I promised Sunday that I would put some recommended resources up as we prayerfully respond to the reality of life in this fallen world filled with orphans.  Here goes:

First, the book by Russell Moore that I am reading is entitled Adopted For Life: The Priority of Adoption For Christian Families & Churches. 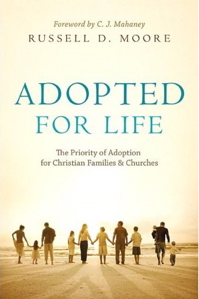 No matter your life situation - young or old, married or single, children or no children - this book has some very important and powerful things to say to you.  It's not just the story of one family's adoption process (though it is that, and it's a good one that will both break you up and build you up), it's also a biblical theology tour de force.  This is not just a book about adoption.  It's a book about God and his big picture purposes for creation and redemption.  Enough with the recommendation.  Just read it!  But if you're not going to read it - at least read this article by Moore.  If you were in the service on Sunday, I quoted from the beginning and conclusion of the article.  The whole thing is really good.  And it's not that long.

I'll put some other links in another post, but let me close this one with a plea.  Would you join me (i.e. go write it in your prayer book now - if you don't have a prayer book, go buy one), as part of the spiritual family that is Bethel Baptist Church, in praying this next year for God's grace and direction regarding our role in adoption and foster care?  What might God do in one year...with ripple effect that breaks on generations to come and the very shores of eternity?
Posted by Chris McGarvey at 2:59 PM No comments:

Reflection in the fangs

This coming Sunday (11/7) is "Adoption Sunday."  I'm reading Russell Moore's excellent book Adopted For Life.  I was struck by this sobering quote (p29):


"One's "flesh" shows who one's father is--and that's terrifying.  When we "bite and devour one another" (Gal. 5:15), we're imaging one who seeks "someone to devour" (1 Pet. 5:8), not the One who came to seek and save that which was lost. ... Our birth father has fangs.  And left to ourselves, we'll show ourselves to be as serpentine as he is.  That's why our sin ought to disturb us."

Does your sin disturb you?  Do you ever see the reflection of his fangs in your tendency to "bite and devour one another" [think critical spirit, gossip, slander, unrighteous anger, a sharp (or is it forked?) tongue, biting sarcasm, I-have-to-win argumentativeness, back-biting, back-stabbing, etc.]?  When you do, what do you do?

Should we not look to the One who swallowed up the punishment that our sinful appetites earned us?  Should we not look to the One who crushed that ancient serpent's head (see Gen. 3:15), fangs and all?  He wasn't seeking someone to devour.  He came to seek and save the lost by giving his body and blood to feed and satisfy us.  When we look at him and feed on him, those selfish passions and desires will be crucified (see Gal. 5:24; 6:14) and we will be filled with love, joy, peace, patience, kindness, goodness, faithfulness, gentleness, and self-control (Gal. 5:22).  And our re:flection will look completely different...like the One who loved us and gave himself up for us (Gal. 2:20).
Posted by Chris McGarvey at 11:34 AM No comments:

"And we all...beholding the glory of the Lord, are being transformed into the same image from one degree of glory to another. For this comes from the Lord who is the Spirit." (2 Corinthians 3:18)